It's October and the official beginning of National Breast Cancer Awareness Month. Every month, of course, should be that month, but it's this one that leads me to reflect a bit about good friends and loved ones who have faced that courageous fight. Some were successful, but some were not.

I recall a stranger from Chicago who wanted to purchase some pins I had collected. As a fundraiser, each fall the Hard Rock Café issues a new guitar pin commemorating Pink October. At that time I had every one from the first year forward - a complete collection. She purchased it from me and then told me how much it meant to her since she was - so far - a survivor. I shared with her that I was a cancer survivor as well.

I think of a faculty colleague who received her diagnosis decades ago and is still amazing me with her intellect and ability to ask the tough questions at just the right time. There is another colleague whose diagnosis is much more recent, and so far she seems to be winning her battles, physical and psychological.

It's hard also not to remember one of my wife's aunts who received her diagnosis many years ago and is no longer living. She kept it a secret and refused treatment for reasons never stated and, therefore, for reasons never to be understood. I think implicitly we all assumed she feared the treatment would leave her less of a woman in her husband's eyes. It would not have, and the result, of course, was that for many years he had no wife at all and their children no mother. I don't know if her children have ever resolved the conflict they must feel.

I think mostly about a friend of over 40 years who was diagnosed within the last three years. She chose to fight, however, and appears to have the upper hand, but it has been a brutal struggle. By her side the entire time was a loving husband who cared only that she remain alive. This is a couple I was very close to years ago but had drifted away from - stupid carelessness on my part. Her husband cared for her enough to contact me at a time when the support of others was perhaps most important to her. I telephoned and made sure to visit the next time I was in that area. She sounded and looked wonderful to me, but I know something about battles such as these and how important attitudes are. I saw her again recently, and she's winning. Our time together makes it seem as though I was never gone, but it will be difficult for me to thank him enough for pushing me to renew that which I had let fall into disrepair but more importantly for giving her the support she needed. It was surely instrumental in her decision to fight and choose life.

Cancer is such a scourge. The least we can do is get it out in the open since we are still so barbaric in our treatments for it. We cut it out, we burn it out with radiation, or we poison the body with sickening toxins and hope only the cancer cells die. The real key, of course, is to find it early. That's when our chances are best, and that's why I salute efforts like the Feel Your Boobies Foundation who sponsors the "Are You Doing It?” Reminder Campaign, an annual effort focused on utilizing unexpected and unconventional methods to remind young women to conduct breast self-examinations. 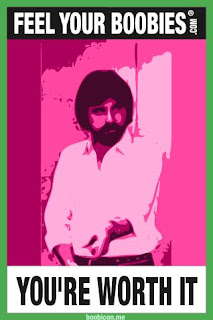