Oops. I'm embarrassed to admit I missed it, but yesterday was Blogging Against Disablism Day. We were asked to post something on May 1 related to disability or as close to that date as possible. I guess that's now for me, and I am republishing a post from July 3, 2010. 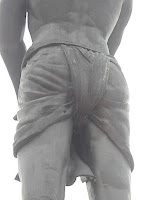 I’m a fairly content fellow. My physical disabilities are in many ways far less challenging than those of others, but there are a few things that never fail to get my knickers in a twist. For example, some folks can’t stand the fact that others with disabilities get to park closer to where they are going than they do. I call this kind of attitude a leading indicator because if people are still that insensitive to disability issues, there remains much to be done to secure the civil rights of those whose independence is persistently challenged.

An editorial in Mainstream magazine noted that the three laws of thermodynamics could be summed up as: you can’t win, you can’t break even, and you can’t quit. The author also noted that this was true of disability rights advocacy as well and that it often seems we can never do the right thing!

If we write letters, we are ignored by the recipients and called wimps by the radicals. If we complain, we are called whiners. If we sue, we are told we should have complained first or at least written a letter.

If we get thousands of people to respond to an issue, we’re told we have overwhelmed the system so now it’s paralyzed. If we don’t get a mass of responders, we’re told we didn’t show enough support.

Well, the disability community has been patient since 1990 when the Americans with Disabilities Act was signed into law. We are venting our frustration in an orderly way - through the courts. After all, we are told that is the “proper thing to do.

Nevertheless, we are still accused of not proceeding “correctly.” Come on! We’re not setting fires; we’re not rioting. We are simply fighting by their rules and winning - not every time, but it is getting better. The opposition, however, doesn’t like to lose - especially to a bunch of disabled people. So you and I and everyone else who cares needs to stay the course. We are well into our journey, but the destination is not yet in sight.

It will take determination and persistence. That’s DETERMINATION and PERSISTENCE - in capital letters. I’m reminded of the story of a young woman who was looking for a job and made an appointment for an interview at a prestigious company. At the interview, she asked if she could get into their well-respected training program. The personnel manager, who was very busy and besieged with applications snapped, “Impossible! Come back in ten years.” The young applicant asked, “Would morning or afternoon be better?” Now that’s determination, and we’re going to need that level of determination if we are to reach our goals.

About two and a half millennia ago, Thucydides, the great politician of Ancient Greece, was asked when justice would finally come to Athens. His response was wise. He said, “Justice will not come to Athens until those who are not injured are as indignant as those who are injured.”

All we want is to boldly go where everyone else has gone before.