On bolts of lightning and bubble gum bubbles

Last night, my son and I flew back to Colorado from New York. On the outbound journey, I was optimistic that this would be my last time departing from DIA, perhaps for several years. On the return, I was somewhat depressed to realize that we would likely be repeating the trip again in a couple weeks and then once more at the end of June, when we leave Colorado permanently.

(After some debate, we decided against a cross-country drive. Instead, I'll sell my much-despised Jeep - an applicant for our fellowship nicknamed it the Loathsome Liberty - and we'll fly back. I am looking forward to leasing a new Mustang...I loved my first Mustang, a black 35th anniversary edition from 1999, almost as much as my dad loved his. But I digress again...)

We connected through Chicago, where I tiredly observed a pregnant woman and her husband persuading the Southwest staff to allow them to pre-board. I would have considered it degrading to claim that my pregnancy prevented me to walking down the jetway in a timely fashion, but I am trying to apply a lesson from a college course in Buddhist meditation and practice assuming the best of people...maybe she truly had an unseen and severe medical or psychological condition related to her pregnancy that necessitated the extra time.

During take-off, I pulled out a piece of gum to chew and casually blew a bubble with it. Finn noticed and promptly burst into fits of hysterics, accompanied by outright begging, More bubble, please, Mamma, please more bubble, and more tentatively, I blow bubble? Despite his excitement, both his manners and his grammar were unexpectedly stellar. He was simply delighted beyond belief by the concept of bubble gum. I was delighted to distract him from a piece of waffle that had dropped on the floor and that he wanted to retrieve. He also seemed puzzled by what, precisely, was making the bubbles. When I leaned toward him to give him a kiss with an unpopped bubble, he quickly squirmed away, and when I finally succeeded in planting one on his nose, he squealed in disgust.

After about thirty minutes, when I was started to worry that my TMJ would never be the same, I glanced out the window at a huge and ominous - though clearly quite distant - storm cloud. I claim no metereological expertise - at first, I thought, wall cloud, but after Googling a bit, I think shelf cloud might be more accurate. It reminded me of this photo by Jason Weingart, initially posted on Twitter, but which I stumbled across while looking up the weather last week. 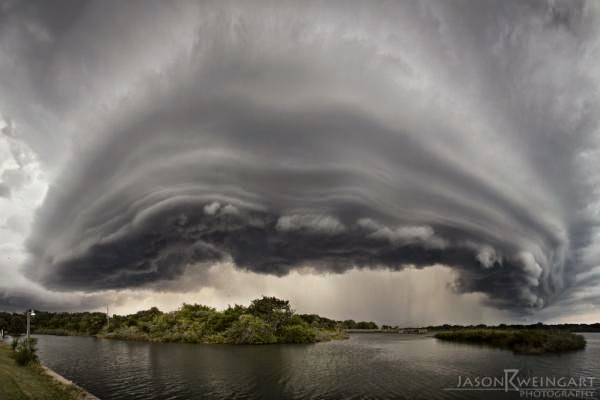 I pulled Finn away from his iPad and into my lap. He has not been overly interested in clouds thus far - I could stare at them for hours and contemplate their fascinating, frightening, heartbreaking loveliness - but I told him that he needed to watch this cloud very, very carefully, and that if he paid attention, he would see it light up. With lightning, I added, and he repeated, Ligh-een? because he now immediately repeats any new word or phrase anyone says to him.

We sat very still, faces close to the glass, for a few minutes, and then a remote corner of the cloud flashed. It was subtle, but Finn noticed and his eyes widened slightly. A larger flash followed. Then finally a brilliant bolt burst from one part of the mammoth cloud to another. We watched the eerie cloud-lightning dance until our plane was hundreds of miles past. After I could no longer see the storm, Finn peered over my shoulder, between the seats and pointed excitedly toward the window behind us. His interest never faded.

Last summer, I flew sans bébé directly through an electrical storm for the first time. It was utterly mesmerizing, thanks to my deep faith in science and technology. Doubly so, in fact, because I mean not just that I trusted the plane's ability to withstand of a bolt of lightning, but also because I felt like I had the smallest glimpse of God in the power and beauty of the storm.

My best childhood memories of my dad mostly involve science and the kind of faith that goes with science, a certain belief that curiosity, inquiry, and skepticism are almost without exception really good things. Things to believe it, things to value, absolutely, but also things that go hand in hand with the kind of wonder and awe that many people seek in mainstream religion. I especially remember watching the Nova series on PBS with my dad and dreaming about being an astronaut or an astrophysicist or maybe a biochemist when I was grown up. (I am fairly certain that I devoted much more time to these daydreams than to planning my future wedding.)

As a grown-up now, I realize that I never believed in a God who made man in His image but that I never stopped believing in the God who is everywhere, who is the mystery of existence, the unknowable answer to our deepest questions. For me, God is there in everything from the mathematical equations underpinning physics, to the Impressionist haystacks I revisited in the Art Institute of Chicago last week, to the chance for a young woman to hold her little boy and watch a storm from 30,000 feet in the air.

The most important gift I hope I'll ever give Finn is that sense of wonder and awe...knowing that extraordinary things happen every day, that there is meaning in our existence, and even if we never discover it for ourselves, that it is always worth seeking. 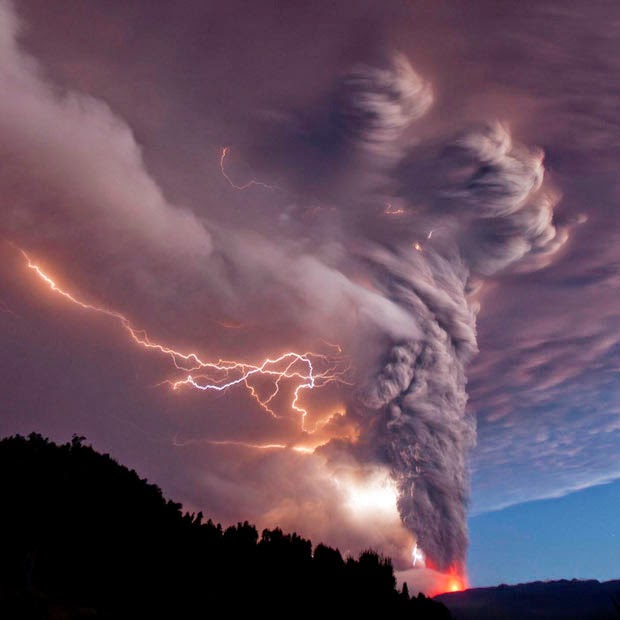